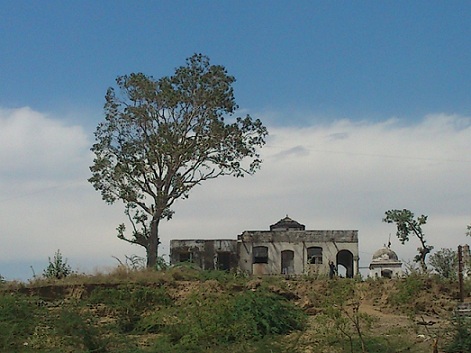 Burwah, a well known pilgrimage center – beautiful landscape – all along the banks of mother River ‘Narmada’- The goddess of ‘Tapa’, ‘Sadhana’- Lord Shankara’s daughter- Truly represents the thousands & thousands years old ‘Bhartiya Sanskrtiti & `Paramapara.’ Lord ‘Vasudev’ respectfully known & acknowledged as P. P. Thorale Maharaj (प. प.थोरले महाराज) and Datta-Swarup Sanyasin ‘P. P. Shrimad Vasudevanand Saraswati Swami Maharaj’. By the divine wish expressed by mother ‘Narmada’ and conscious dialogue between him and Lord ‘Dattatreya’ decided to honour the prayer and to conduct and perform rituals, spreading of ‘Dnyanbij’ (ज्ञानबीज) and cultural heritage and the importance of Ashramas and Aachara’s by way of ‘Sanyas Dharma’- The most sacred Dharma as per Hindu & Vaidic (वैदिक) traditions – way of living.

P.P. Thorale Maharaj- in his entire stay- never touched food but lived entirely on fruits, Sattu (सत्तु) & Butter milk. The centuries, after Shrimad Shankaracharya, had never seen and experienced the Vibhuti (विभूती) like him. The absolute illustration of Grand Sanyasa Dharma.

The days and years passed by-

Everything started dividing and went into ruins- The spiritual traditions started shaking-trembling. The Hindu Dharma & Vaidic Parampara always threatened by its own people – towards ashes & extinction.

Are we supposed to come together & do something? Expressing ‘gratitude’ towards Parampara & Aachara (परंपरा आणि आचार) and not doing anything-

This is our identity? … Yes – We are like this only.

Today’s ‘Datta Parampara’ or ‘Guru Parampara’ is worshipped in everybody’s heart & head – is definitely gaining momentum but is in depressed state due to lack of conscious people – not coming together – crores of people and Sadhakas are there – but Sanskriti & Parampara struggling to survive.

Specifically, the pilgrimage places, P. P. Thorale Maharaj visited and made a ‘stay’ in ‘Chaturmasya’ period are, almost all the places, in a very bad shape – became dirty – not worthy to stay – No Vaidic Poojaarcha – No any rituals – for decades.

This is the ugly truth – a bad message to the Sadhakas of Datta Parampara worldwide and Society in general. We own beautiful houses and pray to him for his ‘Kripa’ and blessings but never cared to visit and never gave a thought.

Where our ‘Lord’ stays. We must see and visit – ‘NEXT’ – Our conscious will guide us – That is ‘Guru Dakshina’ to our ‘Lord Vasudev’.

Here is ‘BURWAH’ – The beautiful land sketch – has lost its luster-maligned by us – No proper Vaidic Poojanarchan (पूजन-अर्चन) – no any offering – No ‘Annadaan’ (अन्नदान) – Pigs and dogs are freely moving.

‘We are his children & He is our Father’

Lord Vasudev Jirnoddhar Samiti declares with absolute pain and sadness in the heart, we will wash out our sins, sincerely do the duties till our last breath.

Oh ‘my people’! Please come together.

‘Let us build his Empire.’

Small yet significant steps have been taken in building empire of our Aacharya.
A 300 mtr ghat has been built on the Banks if River Narmada at Burwaha, Nav Ghat Khedi by the Gram Panchayat under the guidance of P.P Ajit Dada in barely 3 months’ time. The ‘Vasudev Datta’ ghat has been named and inaugurated by Shri Dada. The architecture of the temple has already been finalized and all these procedures are legally backed up as the Burwaha temple trust is now a Public Trust.

The first and the foremost pilgrimage place- P.P.Thorale Maharaj has selected after his Himalayin ‘chaturmasya’ places (स्थान), which are still unknown and not searched by anyone, is the most beautiful ‘Land Sketch’ on the ‘Vast expanse’ of most sacred Mother River Ganga (जान्हवी) Brahmavarta, the sacred place ever mentioned in our Puranas and Vaidic literature, is spiritually honoured as ‘birth place’ of Lord Brahma from the umbilicus (नाभी) of Lord Vishnu – well known and acknowledged as नाभी प्रदेश (centre region) of our mother planet (पृथ्वी) – Prabhu Ramchandra – our Rashtra belongs to him- HE rules us even today, and Mother Sitamai delivered ‘Lav-Kush’ in Valmiki Aashram in Brahmavarta- ‘Child’ Dhruva became ‘Lord’ Dhruva only in this sacred land- doing ardent Tapasya.

Historically in earlier times ‘Peshwas’ got defeated here by British army in 1857 revolt – we were enslaved for another 150 years by British. Got freedom in 1947- A journey of independent nation starts afterwards.

All along the expanse of mother Ganga- out of the fear of death due to ‘plague’ invasion thousands of people gathered and prayed ‘Swamiji’ and begged for life. This is here at this Divine moment and the day, P.P.Thorale Maharaj blessed every individual by offering Maha-Mantra.

Vani form of Lord Dattatrey- Thousands of people were initiated (अनुग्रहीत) and saved consequently by devotional chanting of the same ‘Maha-Mantra’.

P.P.Thorale Swami Maharaj preferred to stay in Brahmavarta for 4 Chaturmasya and total period of four and a half years- Through His highest consciousness, poured down the ‘Sakshat Datta-Vani’ in the form of eternal literature. Nobody can define and understand the source and divine presence of ‘His’ master.

This, truly, one of the greatest scholars of Ancient India, has created the ‘Absolute wealth’ for all kinds of people. He is honoured and respected as knowledge – reincarnation of Lord Dattatrey. By worshipping him, aspirer (साधक) finds the gates of knowledge opened. He created enormous literary wealth with the Divine Conscious umbrella covering the entire universe. Shri Datta Puran (Ved Pad Stuti वेद पाद स्तुती), Laghumanansaar (लघुमननसार), thousands of shlokas and padaas (पदे), stutis (स्तुती रचना) for the benefit of mankind.

His long stay (like Nrisinha wadi for Lord Dattatreya) – why he has chosen this place for his तपस्या- (best known to him only) – must be and is the ‘spiritual capital city’.

P.P.Thorale Maharaj has selected and stayed on the banks of mother ‘Ganga’ and umbilical region (नाभी प्रदेश) or centre region of mother planet as his “Capital Abode” and created absolute enormous wealth of spiritual sciences and eternal energy centers for centuries to come.

Saints and Visionaries are known for their ‘vision’.

Ved Vasudev Pratishthan and Resp. Subhedar family from Brahmavarta has urged at the Lotus Feet of Lord Vasudev and prayed for his divine blessings and kripa to Restore, Renovate, Reconstruct, Revitalize, Reenergize-

Ved Vasudev Pratishthan has started Vedic poojanarchan from 9th July 2013 (Aashadh S. Pratipada) and honouring and celebrating the other ‘utsavas’ at- Brahmavarta.

‘Our Acharya Needs Us.’ Shrimad P.P.Vasudevananda Saraswati Swami Maharaj – Principal Shankaracharya of ‘Jyoti Math’ (Himalaya) today. Divine master of Masters, graciously visited this place in 2000 and asked and ordered to revitalize the Samadhi place and do the Dharma deed (कृत्य) and restoration of Dharma as soon as possible. Negligence to the place hurts the ‘parampara’. 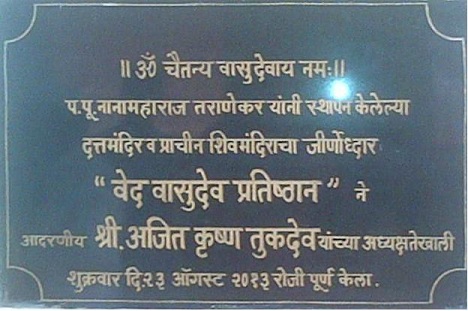 All the people from the area (पंचक्रोशी) are truly dedicated to the Datta Parampara and Nana Parampara. We feel proud and honoured for the divine act and total involvement of ours- P.P.Thorale Swami Maharaj has blessed us with the ability to build the same.

small beautiful village, Yeoti in district Amravati (Vidharbha). Majority of people are Kshtriya Rajput- claim proudly to be the descendents of Rana Pratap Sisodiya, the great warrior king from Rajasthan.

According to Hindu tradition every village is protected by a goddess- This parampara is still held piously throughout the ‘Bharat Varsha’.

Nearly 125 years ago, a great yogi, Bairagi Vishnudas Maharaj came from unknown destination and due to his occult power the villagers had developed faith in him. These Bairagis are very ardent in their Sadhana and always remain away from place. He stayed and built the temple and idols of Prabhu Ramchandra, Sitamai, and Laxman were placed with highest honour and ‘Pran-Pratishtha’ ceremony was done. Entire village was deeply attached.

Again days and years passed by – Mandir or temple lost is importance- people feared going in- idols were not properly worshipped.

There was a very cordial dialogue between villagers and Ved Vasudev Pratishthan. Entire process of rejuvenation and restoration of Mandir and tradition was thought over and partial developments of mandir and again the Pran-Pratishtha sohala and Yadnyas were organized.

Now Ram Temple, worth visiting, and children and elders regularly visit and do their Sadhana.

We feel proud and glad- We are getting communicated with society and parampara.

Our purpose is served.