The divine personalities which truly represent Vishwa Dharma or God in its true and real form are easy to reach but difficult to understand.
Ved Vasudev Pratishthan, in its real form, is not just an organization of devotees with certain or Loukik intentions but a family which wants to know by realization (self and extended self) what the spirituality is, where it exists, where it is to be searched and an intense urge to assimilate with the same.
Mission of Ved Vasudev Pratishthan is not just a mission of an organization but it is a plunge into the force of divinity diverted towards the absolute consciousness, separating oneself from the unconscious beings dwelling in hands of uncertainties and darkness, which is mission of Vasudev. It’s a Vasudev Mission.

Vasudev, the reincarnation of Lord Dattatreya in the knowledge form, Ashram form. Vasudev is the soul of Lord Dattatreya, highly evolved form in the recent times.
Being in knowledge era, Ved Vasudev Pratishthan truly wants to worship Gurutatwa or the knowledge (Gyan and Chaitanya) by its sincere Karmas, unconditional love and absolute efforts to attain material growth which will truly contribute and serve the nation or the motherland.
Every breathe with determination for the highest by virtually every means is the vision of Ved Vasudev Pratishthan, Parivar.

To connect and communicate with the society in order to keep the glory of our ancient tradition and culture which is Acharya or DyanaParampara, which was the way the society its culture and character was developed.
To conduct under the banner of Vasudev Sangeet Sabha, the musical stage shows like Vasudev Shwasitam, Dhanya Ti Alandi, Mazhe Gurudev and many more on various socio-spiritual subjects and spirituality, in various cities and states. (Have already conducted more than 250 programs)
To serve the social causes by undertaking various health checkup camps such as blood donation, eye checkup, eye donation etc. We intend to create pleasant atmosphere and opportunities to live utmost glorious, hopeful life in the society for the visually impaired (blind) and physically challenged people.
To conduct household upasana i.e. praying and worshipping God by coming together, this is the fundamental and most vital step in sadhana. Have conducted it at more than 3000 places. To conduct series of spiritual discourses and lectures on science, religion, spirituality and culture. To celebrate the major events in Lord Dattatreya parampara and our culture like Gurupournima, Datta Jayanti, Janmotsav, Gurudwadashi, Dasnavami etc.
Keeping and enriching the values of national importance. To eliminate the misconceptions in the society about our customs, tradition, culture, religion and spirituality and establish a universal thought process and life process discovered and governed by our acharyas who were Adya Shankaracharya, P.P. Shrimad Vasudevananda Saraswati Swami Maharaj, Ramkrishna Paramhansa and all who have formed a robust spiritual architecture of BharatVarsha. To learn what is to be actually learnt and to unlearn what has brought the entire world to the illusionary happiness of material belongings and gains which ultimately drives us to sorrowful end i.e. the perfect conditioning of chitta, vrutti and antakkaran which leads to an emergence of consciousness and efforts towards absolute which is the only hope of survival. 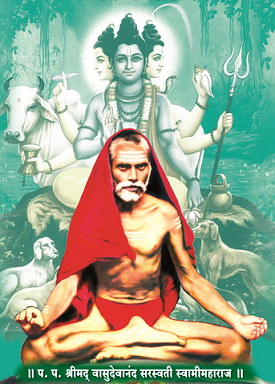